Take the flour and milk powder in a large bowl. Make a small well in the centre, add yeast and sugar. Add luke warm water and start mixing. Add the salt, keep adding water and kneading the dough till it all comes together. Take the dough on a clean platform. Gradually add the room temperature butter and keep kneading. Let the dough rest for about an hour or until its doubled in size. Cover it with cling film or damp muslin cloth.

In a bowl mix the brown sugar and cinnamon powder until well combined. 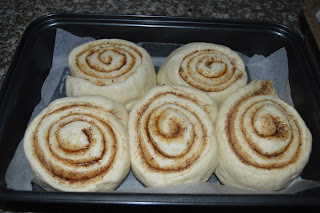 Take the dough and punch out any air. Use a rolling pin to roll the dough in a flat rectangle or square shape. Once its flattened equally from all sides, spread the softened butter over the entire surface, you could use a brush or just your hands for it. Gently spread the cinnamon sugar all over the surface of the dough. Roll the dough very gently till you make a log of it. Use a pastry cutter, a serrated knife or a floss to cut the rolls into small pieces. Put them in a baking dish, cover with a damp cloth for 10 minutes and let it rise (proof). 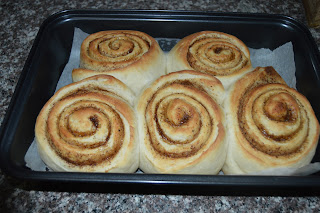 Preheat your oven to 170°C. Bake the cinnamon rolls for 10 minutes, or until the top turns golden brown. 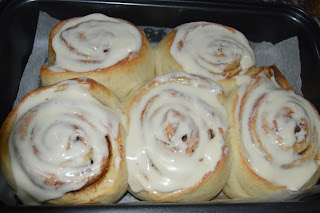 Once you take the cinnamon rolls out of the oven, let it rest for about 1-2 minutes. Add the cream cheese frosting on each of the buns, while they are hot.

That’s it! The cinnamon rolls are ready to be enjoyed!! 😋😋😋😋 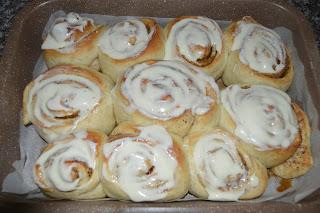 Ps: You could replace the all - purpose flour (maida) with wheat flour for a healthier option, it wouldn't make any difference to the taste. 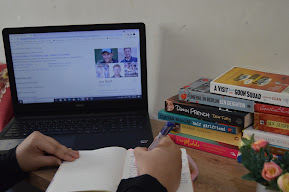